Are you're looking to hire cheap Alabama moving companies, then you have found the right place. Finding professional Alabama movers has never been so easy. Just enter your zip code and moving day in the search box to view available AL moving service providers in your area. You will also find many tips and information that will help you with a move.

If moving your residence seems like a difficult task, then moving a commercial office is something that may give you headaches. Whether it's across town or across the state line, business moves in Alabama require careful planning.
Business Moves

Moving pianos is not an easy process. There is a big risk to the piano, risk of injury to the movers and to the property. Pianos should only be moved by professional moving companies.
How to Move a Piano

Moving from one home to another one can be an expensive and time-consuming task. By creating a moving budget you will save money in the long-run. It will also help you to find the most efficient way to move your goods to your new home.
Create a Moving Budget

When shopping for Alabama local moving companies make sure to compare more than just hourly rates. Some cheap movers in Alabama have low prices, but do they provide professional service and guarantee you a stress-free moving experience?
Cheap Moving Companies

Are you moving to Alabama or just within the state? Finding a local moving company in Alabama is now easier with Movers Corp. We provide local movers and moving labor providers for full-service and DIY moves. Browse through our listings of local AL movers to find a company that is right for you. All moving companies list their prices, services, and reviews from their past customers.

If you are not from Alabama and moving to Alabama you may have difficulty deciding where to move. You will be pleasantly surprised at its breathtaking mountains, gorgeous rivers, and beautiful coastline. If you are a fan of white sand and sparkling beaches, you can move a little further along the coastline to Gulf Shores. No matter where you move, Alabama has something to please you with.

Having reputable AL movers to handle household items is something everyone is looking forward to. Our website lists the best helpers and movers in Alabama so you can make your decision in advance.

Alabama is located in the southern region of the United States of America. Alabama is the 30th largest state in the United States with 52,423 square miles, 3.19% of the area is water. Alabama consists of 22 million acres of forest or 67% of the total land area. The state ranks 23rd in population with over 4.8 million residents based on the last census. The largest population of Alabama is located in Chilton County. Alabama is known as the "Heart of Dixie". Alabama is also unofficially called the Yellowhammer State, which is also the name of the state bird. The capital of Alabama is Montgomery, and the largest city by population is Birmingham.

The north region of Alabama is mostly mountainous, with the Tennessee River cutting a large valley. The natural wonder in Alabama is "Natural Bridge" rock, the longest natural bridge east of the Rockies. Alabama generally ranges in elevation from sea level to over 1,800 feet. The highest point is Mount Cheaha, at a height of 2,407 ft.

Alabama has very hot summer and mild winter with copious precipitation throughout the year. The climate in Alabama is described as temperate with an average annual temperature of 64F. Temperature is warmer in the southern part of the state with its close proximity to the Gulf of Mexico, while the northern parts of the state, especially in the mountains in the northeast, tend to be slightly cooler. Alabama annually receives an average of 56 inches of rainfall and enjoys a lengthy growing season of up to 300 days in the southern part of the state. Summers in Alabama are among the hottest in the States, with high temperatures averaging over 90F throughout the summer in some parts of the state. Alabama is also prone to tropical storms and hurricanes. 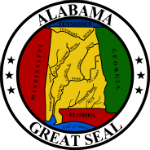 
Moving Companies Alabama - Get Free Local Moving Quotes from Movers in AL
Browse through the list of counties and cities below to find a moving company in Alabama that fits your needs. All service providers list their moving rates and services which make the process of finding right moving services in AL easy and fast.