If you are searching for professional movers in Maine, then you have found the right place. Finding residential and commercial Maine moving companies has never been so easy. Just enter your zip code and desired move date in the search box to view available ME moving service providers in your area. You will also find helpful tips and information that will help you with a move.

Household and garden plants require careful preparation for a move. Find out how to prepare and move your plants.
Moving House Plants

Most Maine moving companies base their charges for local moving services on an hourly rate. But on the final bill, you may notice unexpected fees or charges that you were not aware of. Learn how to avoid those unexpected charges.
How To Avoid Extra Moving Costs

Moving from one home to another is associated with a lot of expenses. However, the IRS allows all taxpayers to deduct moving expenses from their taxes. But you must meet their requirements.
Deducting Expenses After You Move

Finding a cheap Maine moving company is not essentially the right approach, you should compare moving costs and provided services, check the licenses from few companies. Keep in mind that the lowest price is not always the right decision.
Cheap Movers

Are you moving to Maine? Movers Corp can help you find the right moving company in Mane. Our mission is to deliver services that meet your requirements and needs. We provide moving labor and full-service moving services in Maine for residential and commercial customers.

Maine is located in the New England region which is located in the Northeastern United States of America. It is known for its scenery which consists mostly of its rocky, jagged coastline; its low and rolling mountains; and an interior that is heavily forested. Maine is also known for its seafood cuisine, consisting especially of clams and lobsters.

The best season to move to Maine if you have kids is in the summer. However, moving companies in Maine typically charge higher rates during these times.

A majority of Maine's geography was created by heavy glacial activity which took place towards the end of the last ice age. Some of the more well-known glacial features include Somes Sound and Bubble Rock. "Glacial erratic" is also known as Bubble Rock. Bubble Rock is a huge boulder which is located on the edge of Bubble Mountain in the Acadia National Park. Acadia National Park is also the sole national park in all of New England.

Along with Acadia National Park, there are other areas that are undergoing management and also have a high level of protection. A few of these areas are Appalachian National Scenic Trail, Saint Croix Island International Historic Site, and Roosevelt Campobello International Park.

The State of Maine has a variety of ancestries and the largest ancestries are: English American, French or French Canadian, Irish, American, and German.

Tourists find Maine to be a leading attraction not only for their recreational activities but also for their scenarios. With a 5,600km shoreline, Maine is also quite famous for is scenic views of the ocean. Fishing villages, lighthouses, beaches and a vast number of offshore islands can be along the rock-bound coast of Maine making Maine one of the must visit states in the nation. 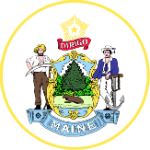 Moving Companies Maine - Get Free Local Moving Quotes from Movers in ME
You want to find a local moving company in Maine that has a great track record of success and prides themselves on being the best company in the area. Hire a mover from MoversCorp.com network that offers reliable and affordable moving services in ME.