Are you searching for local Arizona moving companies, then you have found the right place. Hiring affordable and professional movers in Arizona has never been easier. Just enter your zip code and moving day in the search box to view available AZ moving service providers in your area. You will also find many tips and information that will help you with a move.

The moving boxes are an important part of moving process. Usually, people purchase them for their move, but there are ways to get free moving boxes.
Where to Get Free Moving Boxes

With so many AZ cheap moving companies in the market, the task of selecting the right company can be difficult. If you are hiring cheap movers, you should go with the one that meets all your requirements, and not just based on low hourly rates.
Cheap Movers

If you are looking for a local moving company in Arizona, you're at the right place. Search through our pre-screened Arizona movers and helpers to find a company that fits your needs. At MoversCorp we list hourly rates and customer reviews to make your moving experience as stress-free as possible. If you are considering moving to Arizona also known as the "Valley of the Sun" there is a lot you need to know before you move. Arizona is a great place all year round; it has an average of 300+ days of sunshine a year.

Best time of the year to move to Arizona is spring and summer. Shop on MoversCorp to find Arizona local movers that can help you once you arrive at your new home. We offer moving labor services for DIY movers that can load and unload your rental truck.

Just go through some of the information we have put together for you, that will give you a brief idea about the state.

Arizona is located in the southwestern region of the United States of America and it is the 6th largest state in the USA (land area at 113,998 square miles). Arizona was the 48th state admitted to the Union on February 14, 1912. Arizona is known for its desert landscape, exceptionally hot summers, and mild winters. The capital and largest city by population is Phoenix and it offers an amazing array of nightlife, dining and different family-friendly activities.

Arizona is home to the one of the Seven Natural Wonders of the World Grand Canyon as well as a variety of terrain, climates, and cultures. The Grand Canyon is one of the first national parks in the United States, it was carved by the Colorado River. That's why the state's official nickname is "Grand Canyon State". There are many other natural wonders in Arizona such as Havasu Canyon, Lake Powell and Rainbow Bridge, Petrified Forest, Sunset Crater, Salt River Canyon, Picacho Peak State Park. There are more National Parks and National Monuments in Arizona than any other state. Mount Humphreys (12,643 feet) north of Flagstaff is the state's highest mountain.

Arizona is one of the fastest-growing states in the country. Manufacturing is one of the most important industries in Arizona. Principal products include electrical, communications, and aeronautical items. Over half of the United States copper produced in Arizona. The amount of copper on the roof of the Capitol Building is equivalent to 4,800,000 pennies. Agriculture is another important part of the state's economy. Arizona became a wonderful place to live with family, attend school, and retire. Lots of people are discovering great opportunities in here. 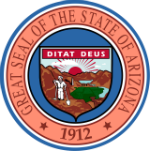 Arizona State University (ASU) is the nation's largest University with over 50,000 students and growing.
Arizona is one of the states that does not tax your Social Security payments at income tax time.
A Fountain located in Fountain Hills believed to be the tallest in the world.
Largest County by area is Coconino (18,562 square miles). Arizona borders with California, Nevada, Utah, Colorado and New Mexico.
State of Arizona Official Website
Arizona Department of Motor Vehicles Telephone: 928-473-2405
Arizona Department of Education Telephone: 1-800-352-4558
Storage Facilities in Arizona Ten largest cities by population: Phoenix, Tucson, Mesa, Glendale, Chandler, Scottsdale, Gilbert, Tempe, Peoria, Yuma.


Moving Companies Arizona - Get Free Local Moving Quotes from Movers in AZ
Browse through the list of counties and cities below to find a moving company in Arizona that fits your needs. Each moving company in AZ lists their moving rates and offered moving services for our visitors to review.