If you are searching for Michigan movers, then you have found the right place. Finding dependable Michigan moving companies has never been so easy. Just enter your zip code and desired moving day in the search box to view available MI moving service providers in your area. You will also find helpful tips and information that will help you with a move.

Moving your household appliances from your residence to another one can sometimes present some tough challenges. When preparing for a move, there are special steps you need to take.
Moving Household Appliances

When you hire a MI moving company to relocate you from one home to another, your goods are automatically insured. But it is only a basic coverage plan, the minimum liability is just not enough to cover damages.
Moving Insurance Options

Maybe the biggest decision that you have to make before moving out is whether you'll hire professional movers or do everything yourself. There are many various things to think over before making the decision. The following article will show you the pros and cons of hiring professional residential movers versus moving yourself.
Do It Yourself Or Hire Movers?

Comparing moving rates and getting moving quotes from different local Michigan moving companies will help you find the best available moving deal. There are lots of good residential movers, but before booking one you should know the differences between non-binding and binding moving estimates.
Binding and Non-binding Moving Quotes

Are you moving to Michigan and need help with your move? MoversCorp can help you find professional helpers in movers in Michigan that can provide high quality moving services. For DIY movers we offer loading and unloading assistance once they arrive at their new home. From our network of Michigan moving companies choose a company that offers the products and prices that meet your needs. Michigan is located in the Midwestern region of the United States of America. The state was named after Lake Michigan whose name is a French variation of the word mishigami which means "Large Lake" or "Large Water". Michigan is also known as the "Mitten State", "Wolverine State", "Water-Winter Wonderland" and "Great Lakes State". The state of Michigan is the eighth most populated state in the nation. Michigan is also home to the longest freshwater shoreline in the world and is circumscribed by four of the five Great Lakes.

The best time of year to plan a move to Michigan is summer. You don't have to worry about freezing weather and children classes. However, moving rates are slightly higher during that season. When you start comparing moving companies in Michigan, you will notice a price increase.

Most of the metro area and Michigan itself is inhabited by Americans of European descent such as French, German and British. Michigan also has the highest number of individuals with Dutch heritage than in any other state.

The economy of Michigan is mostly dependent on life sciences, information technology, and advanced manufacturing. The state is largely known for its auto industry. A few of the leading products/ services/ industries include the following: iron, copper, furniture, military equipment, cereal products, automobiles and information technology. Michigan is also the third largest grower of Christmas trees.

Tourism is a thriving industry in Michigan. Michigan has a 50% land owing to a forest and most of it is deemed quite remote. Hunters, vacationers and nature enthusiasts from all around America and Canada arrive in from Michigan. Tourism in Metropolitan Detroit attracts many tourists to some of the leading attractions such as Detroit Institute of Art, The Henry Ford, and The Detroit Zoo. Museums are also a main attraction in Michigan. Arab American National Museum, Detroit Historical Museum and Charles H. Wright Museum of African American History are some of the museums that can be found.

Alternative attractions that tourists find quite interesting are: Traverse City, which is known as "Cherry Capitol of the World" which in turn makes it the world's largest Cherry producer. Battle City is called "Cereal City U.S.A" and is the headquarters of Kellogg Company. Pontiac is a major manufacturing center of automobiles and is the home of the Pontiac Silverdome. 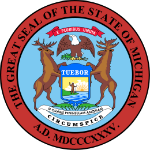 Moving Companies Michigan - Get Free Local Moving Quotes from Movers in MI
Browse by counties and cities to find affordable and reliable moving company in Michigan. Moving companies list their hourly rates and offered moving services in MI on Moverscorp.com for online booking.